The City of Vaughan recently faced significant backlash over their decisions to abruptly pull an event permit and instead of being praised for putting the safety of residents first, were criticized and accused of racism.

Carnival Kingdom was to take place at the Improve Canada outdoor entertainment complex on Keele St., near Highway 407. It was the first time SOS Fest attempted to host the event, which had been running for seven years, in Vaughan. Tickets ranged from $35 to $95, and about 5,000 had been sold. Machel Montano was one of the acts scheduled to perform. 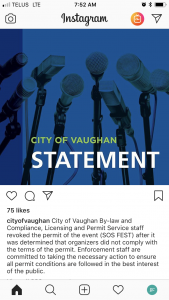 The initial notice posted on social media was short and lacking context. The response quickly grew hostile and the hashtag #justiceforsos started trending. Some of the City’s Councillor went to the media to defend their selves against the decision. Two subsequent updates were made on social media but the messaging did little to calm the barrage of accusations down.

After reviewing the communications surrounding the event, and the reputation management/repair actions the City will need to take- I’d like to share with you some tips on how a municipality should deal with issues such as this, in order to avoid misunderstandings, accusations, and reputation damage.

If you’d like more information or suggestions on how to handle difficult decisions and issues, feel free to send me a message or comment on this post and I’ll be happy to respond.